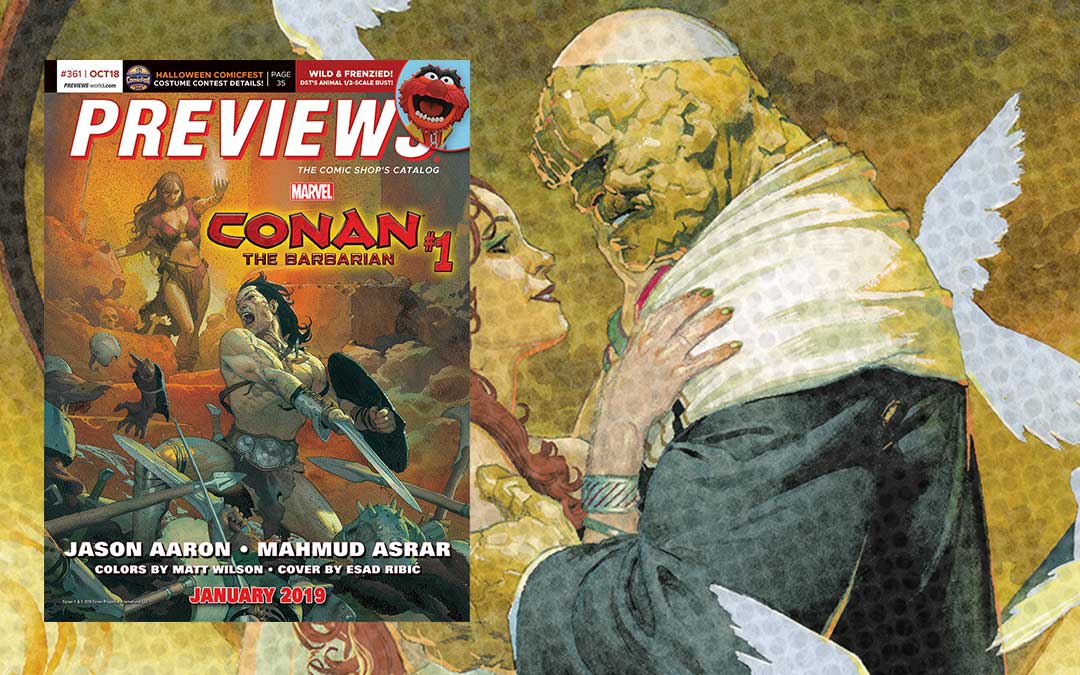 It’s the spookiest time of the year as fall sets in and Halloween starts to send shivers up your spine.

You know what won’t send shivers up your spine though? New Comics!

From DC Comics – The Batman Who Laughs – After the events of Dark Nights Metal, Bruce Wayne discovers that the Batman Who Laughs survived and the only way to stop him might be to do the one thing that Batman has vowed never to do…kill him.  From Scott Snyder and artist Jock.

Other highlights from the October 2018 Previews:

Klaus and the Crying Snowman – Grant Morrison and Dan Mora’s holiday epic is back as Klaus agrees to help an absentee dad-turned-snowman make amends before melting away forever.

Laguardia – In a future where aliens have integrated into the population of Earth, a pregnant Nigerian-American doctor fights an oppressive reality of discrimination. Aiding her is an alien plant named “Letme Live”, smuggled in through Laguardia.

Batman and the Outsiders – When Batman needs to stop the threat of Talia al Ghul’s murderous plot, he needs to go beyond the Justice League, he looks to the all new Outsiders, Katana, Black Lightning, The Signal and The Orphan. By Bryan Hill and artist Dexter Soy.

Freedom Fighters – Robert Venditti and Eddy Barrows bring us a new maxiseries set on Earth X, where the Nazis won World War II.  Twenty years after invading and occupying America, Germany wiped out all metahuman resistance, inclusing the original Freedom Fighters.  When a new team of freedom fighters emerges to challenge the Nazi occupation, they must go on a quest to find Uncle Sam, the spirit of America.

Goddess Mode (DC / Vertigo) – A new series from Hugo Award nominee Zoë Quinn and Spider-Gwen co-creator Robbi Rodriguez. In a near future where humanity’s needs are provided for by a godlike A.I., it’s one young woman’s job to do tech support on it. When Cassandra Price discovers a hidden digital world beneath our own, her life changes forever.

Martian Manhunter – No matter what you know about J’onn J’onnz, nothing will prepare you for this twisted and unexpected take on the Martian Manhunter. Back on Mars, J’onn was about as corrupt as a law officer could be, but he will get a second chance he doesn’t want or deserve! This story by Steve Orlando with art by Riley Rossmo will change his life and the course of Earth…forever.

Avengers #1 – IDW Publishing’s collaboration with Marvel Comics continues with this all ages super-hero take on Earth’s Mightiest Heroes.  When the Earth is threatened by an unimaginable threat, it’s up to Captain America, Iron Man, Thor, Hawkeye and the Hulk to save the day.

Rocketeer Reborn – 80 years after the legend of the Rocketeer has faded away, Cliff Secord’s rocket pack re-appears and a battle to control it erupts.

Die #1 – In 1991 six teenaged friends sat down to play a role playing game, they vanished that night only to resurface two years later, with no explanation for where they had been.  From Kieron Gillen and Stephanie Hans.

Prodigy #1 – The smartest and most successful man, a Nobel Prize-winning scientist, genius composer, Olympic athlete, and expert int he Occult, he’s Edison Crane, and he is going to solve all of the world’s problems.  Mark Millar and Rafael Albuquerque launch an all new Netflix comic series.

The Best Defense – An unsolvable murder, an aquatic doorway to nowhere, a wanderer at the end of time and a cosmic train of planetary proportions. Four seemingly unrelated events that will require the powers and insights of the members of the greatest Non-Team of them all – the Original Defenders.  Plays out in Immortal Hulk: Defenders #1, Namor: Defenders #1, Doctor Strange: Defenders #1, Silver Surfer: Defenders #1 and Defenders #1

Killmonger #1 – Long before he was Eric Killmonger, he was a young boy known as N’Jadaka, stolen from his home and taught only the world’s cruelties.

Miles Morales: Spider-Man #1 – Miles is back, and when the Rhino and a cadre of mysterious criminals start plaguing Brooklyn, things take a dark turn.  Eisner Award winner Saladin Ahmed and Javier Garrón bring you the latest incarnation of the coolest character in the Marvel Universe.

Superior Spider-Man #1 – Otto Octavius leaves the moniker of Doctor Octopus behind and becomes The Superior Spider-Man once again. Otto is going to prove to the world that he’s the most effective and best super-hero in the world. But when a villain that overpowers him by so much shows up in San Francisco there’s no way Doc Ock can win is there?

Winter Solider #1 – Bucky Barnes escaped death, the loss of his identity and a life of murder, he’s worked hard for his sins, but now the Winter Soldier is going one step further. What do you do when you’ve found redemption? You help others do the same.

X-Men: The Exterminated #1 – In the aftermath of Extermination, the X-Men mourn for their fallen brother Cable, but no one is taking it harder than his adopted daughter Hope. Only Jean Grey can save Hope from herself.

X-Force #1 – Cable is dead, now the original X-Force team of Domino, Cannonball, Shatterstar, Boom Boom and Warpath must hunt down the murderer of their former leader. From Ed Brisson and Dylan Burnett, it’s an all new, high octane mutant adventure.

Livewire – AKA Amanda McKee has the power to interface with any sort of electrical device.  She caused a nationwide blackout to save other super powered individual, but now she’s on the run from the law, the government, and others.  Written by Vita Ayala and illistrated by Raul Allen and Patricia Martin, Livewire will tell the tale of one young woman’s journey to discover her powers and her place in the world.

Of course that’s not all, check out all of these other new releases.