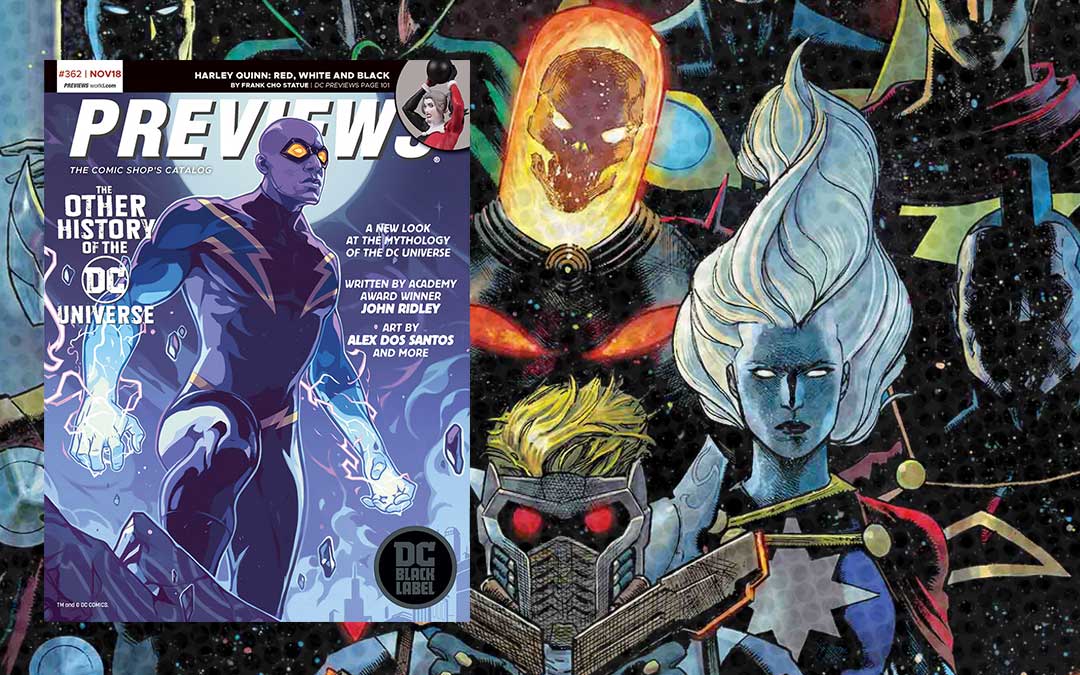 We’ve updated our subscriptions with comics, TPB’s and more from the November Catalogue, with some pretty cool new comics coming early next year.

The Previews Spotlight this month shines on the Other History of the DC Universe, Young Justice Returns, the all new Guardians of the Galaxy, and the return of Criminal from Image Comics…plus about 150 more comics that we’ve added for you to subscribe to.

This month’s Previews spotlight comics are:

Other History of the DC Universe (Mature) – DC Comics
Academy Award-winning screenwriter John Ridley (12 Years a Slave, Let It Fall) examines the mythology of the DC Universe in this compelling new miniseries that reframes iconic moments of DC history and charts a previously unexplored sociopolitical thread as seen through the prism of DC Super Heroes who come from traditionally disenfranchised groups.

Fight Club 3 – Dark Horse
With Maria about to give birth to Tyler Durden’s child, the narrator forms an alliance with his own alter-ego when a rogue group moves against his own plans for the future.

Criminal – Image Comics
Teeg Lawless is back in Center Ed Brubaker and Sean Phillips finally return to their most popular title – Criminial in a new monthly series.

Guardians of the Galaxy – Marvel Comics
The universe is on fire. Hundreds of worlds are at war. Never has there been such hatred and division across the cosmos. And in spite of all this, Thanos of Titan is still dead…or is he? Now, more than ever, the cosmos need the Guardians of the Galaxy…but in the aftermath of the Infinity Wars, who is left to answer the call?

Blossoms 666 – Archie Comics
Jason and Cheryl Blossom seem like perfectly ordinary high school students, but one of them is the Anti-Christ, and neither knows who will usher in the Apocalypse. From Cullen Bun and Laura Braga, it’s The Omen set in Riverdale.

Buffy the Vampire Slayer – BOOM! Studios
BOOM! Studios brings the slayer of big bads back in an all new series. Your favourite characters are reimagined and new allies and enemies will be revealed in this series written by Jordie Bellaire, illustrated by Dan Mora and overseen by Joss Whedon.

Adventure Time Marcy & Simon – BOOM! Studios
After the events of the Adventure Time series finale, Marceline and Simon are finally reunited. Simon asks Marcy to help him make amends for his time as the Ice King, which leads them along with Finn and Jake into the Nightosphere. Written by Olivia Olson (who played Marcy on Adventure Time), with art by Slimm Fabert.

Naomi – DC Comics
DC’s biggest, newest mystery starts here! When a fight between Superman and Mongul crashes into a small Northwestern town, Naomi (last name?) begins a quest to uncover the last time a super-powered person visited her home-and how that might tie into her own origins and adoption. Part of Brian Michael Bendis’ “Wonder Comics”.

Peter Cannon Thunderbolt – Dynamite Entertainment
He’s the smartest man in the world and he’s the hero that our world needs right now. But in our darkest hour, the man known as Thunderbolt may be willing to let the world burn.

Turok – Dynamite Entertainment
A new hero rises! Turok pursues his kidnapped brother in the Badlands of the Old West! In the waning days of the Indian Wars, the U.S. cavalry has captured Andar, but Turok will stop at nothing to rescue him.

Marvel Action Black Panther – IDW Publishing
IDW continues its line of all-ages comics with a new take on the king of Wakanda and his genius sister Shuri in a brand new series by Kyle Baker.

IDW’s 20th Anniversary Celebration – IDW Publishing
2019 marks IDW’s twentieth year, and to celebrate, they are launching a series of one-shots looking backward and forward in a series of comics called 20/20.

Age of X-Man Alpha – Marvel Comics
The age of X-Man dawns and the X-Men cannot stop it.

Conan the Barbarian – Marvel Comics
He’s back in Marvel’s return to the Hyborian Age, where a warrior named Conan rose in the lands we know as Ireland and Scotland today. Conan the Cimmerian will cut a bloody swath through the lands in a new series by Jason Aaron and Mahmud Asrari.

Invaders – Marvel Comics
THE GREATEST GENERATION OF MARVEL HEROES IS BACK – TO STOP ONE OF THEIR OWN! In commemoration of Marvel’s 80th anniversary and springing from events in the pages of AVENGERS and THE BEST DEFENSE, the Marvel Universe’s first super-team is back! CAPTAIN AMERICA. THE HUMAN TORCH. THE WINTER SOLDIER. NAMOR.

Man Without Fear – Marvel Comics
Daredevil is gone, but Hell’s Kitchen is still a place of heroes and villains. Foggy Nelson (issue #1), the Defenders (issue #2), the many loves of Matt Murdock (issue #3), the Kingpin (issue #4) and a mysterious Guardian Devil (issue #5) will all learn what it means to live in a world without a Daredevil.

Star Wars Age of Rebellion Jango Fett – Marvel Comics
THE MOST FEARED BOUNTY HUNTER IN THE GALAXY! JANGO FETT’S reputation precedes him as joins a crew for what seems like a simple job. Wait, is that a KID with him?!

Star Wars Age of Rebellion Obi Wan Kenobi – Marvel Comics
THE EARLY DAYS OF OBI-WAN KENOBI, JEDI KNIGHT! Following the wishes of his master, OBI-WAN has taken on ANAKIN SKYWALKER as an apprentice.