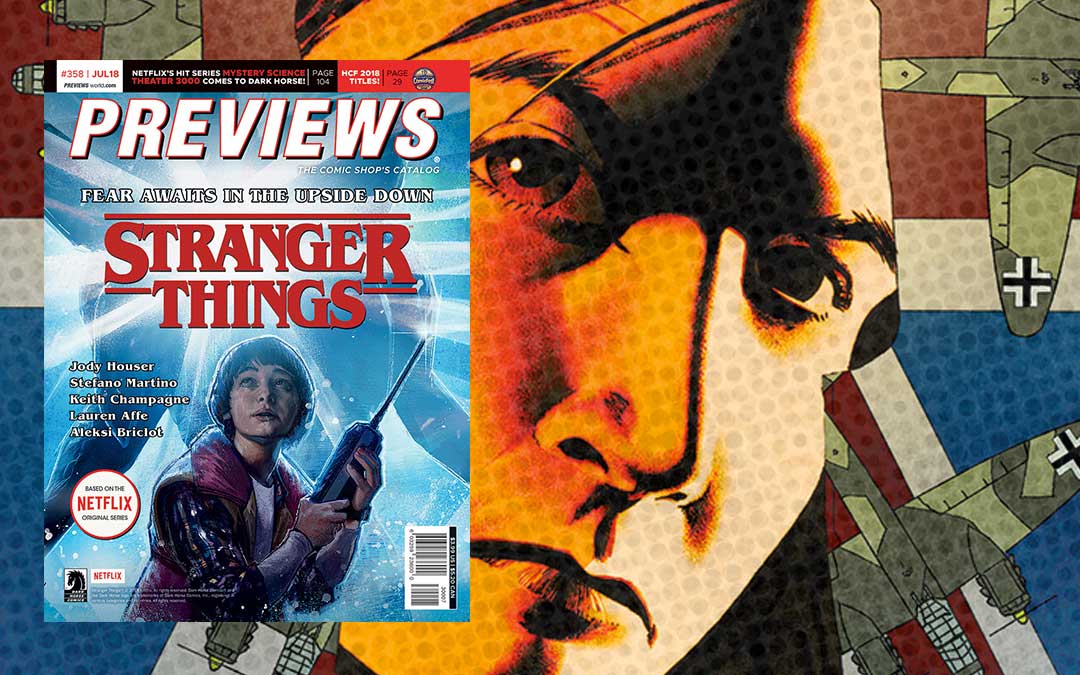 It’s July, and that means it’s heating up – and I’m not just talking about the weather, the comics are as hot as the blistering sun!

San Diego Comic-Con is just around the corner, and there will be tons of great news coming out of the West Coast, but before then, we’ve got a ton of great new comics to talk about.

This month’s July 2018 spotlight (for comics shipping in September):

Stranger Things – Dark Horse
The Netflix hit show is now a Dark Horse Comic! Featuring Will’s unseen journey during season 1 of Stranger Things, find out what happened in the Upside Down in this companion piece to the hit show.

James Bond Origin – Dynamite
Journey back to WWII with a 17 year old James Bond as Jeff Parker and Bob Q tell the earliest story of 007, before any of the double o’s.

Return of Wolverine – Marvel Comics
Sometimes the wise man knoweth when to shut up. He’s back bub.

Heroes in Crisis #1 – DC Comics
The next big DC Event is a crisis of heroes. How does the hero community deal with one of their own when they suffer PTSD? Tom King, who has done wonders on Batman, turns his pen to the entire DCU, and when the DC uses the word “Crisis”, you know the story will be huge.

That’s not all though, there’s a ton of other great stuff.

DC Announced their “Black Label” projects earlier this year at Megacon, it’s a great concept allowing the best writers and artists to tell stories out of continuity however they would like. We’ve seen this in action already, we just didn’t know it, as DC has made the “Batman White Knight TPB” the first collected Black Label title, and if White Knight is any indication of what will be happening with the Black Label line, we’re in for a treat!

Meanwhile, the amazing duo of Brian Azzarello and Lee Bermejo return to the dark knight with an all new bi-monthly tale as the Dark Knight and John Constantine unravel the mystery of who killed The Joker. It’s called Batman: Damned.

Other awesome comics shipping in September:

Cover – DC Comics (Jinxworld)
Brian Michael Bendis and David Mack team up for an awesome story about comic creators who are deep undercover in an international story of intrigue.

The Dreaming – DC Comics
Spinning out of The Sandman Universe, Dream has abandoned his realm, and the dreaming lies tattered and broken. What will happen when something new starts to grow in Dream’s gallery?

Wonder Woman Earth One Volume 2 – DC Comics
Grant Morrison and Yanick Paquette return to the story of Diana Prince and what happens after she leaves Paradise Island. Wonder Woman wants to carry out her mission of peace and love, but how will she do it when she is a stranger in a strange land?

Batman / The Maxx – IDW Publishing
More than a decade after his last appearance, Sam Keith returns to The Maxx, who has somehow found himself in Arkham Asylum, and in desperate need of Batman’s help!

Star Trek vs Transformers – IDW Entertainment
It’s a Saturday Morning Mash Up we never knew we needed as The Robot’s In Disguise journey to Space…the Final Frontier.

Bully Wars – Image Comics
Skottie Young brings us an al new, all ages, ongoing series, featuring Rufus, the biggest bully in Rottenville, who goes from bully to bullied on the first day of high school.

Asgardians of the Galaxy – Marvel
Spinning out of Infinity Wars, Angela, the half-sister of Thor, Valkyrie, Skurge the Executioner, Throg, the frog of thunder, Kevin Masterson – Thunderstrike, and the Destroyer, join forces to take Nebula down before the weapon she wields can destroy the universe.

We updated the system a couple of weeks ago to allow our product import to happen automatically for you. Now you don’t have to do anything, and new products will come into your store.  Not only that, but we’ve added a little alert to the website so that your customers know when new products have been added.

Adding New Comics is easier than ever now!We eliminated the step that required you to add new comics, now they are available as soon as we import them. That means the monthly alert to your customers is only a 2 step process!

We find that the emails we send out, which link directly to the subscription pages for each title, dramatically increase new subscriptions.  We’ve once again written an email that’s ready for you to import.

Finally, we’ve also made a slide image that you can post on the front page of your Manage Comics store to encourage people to link to the new additions.