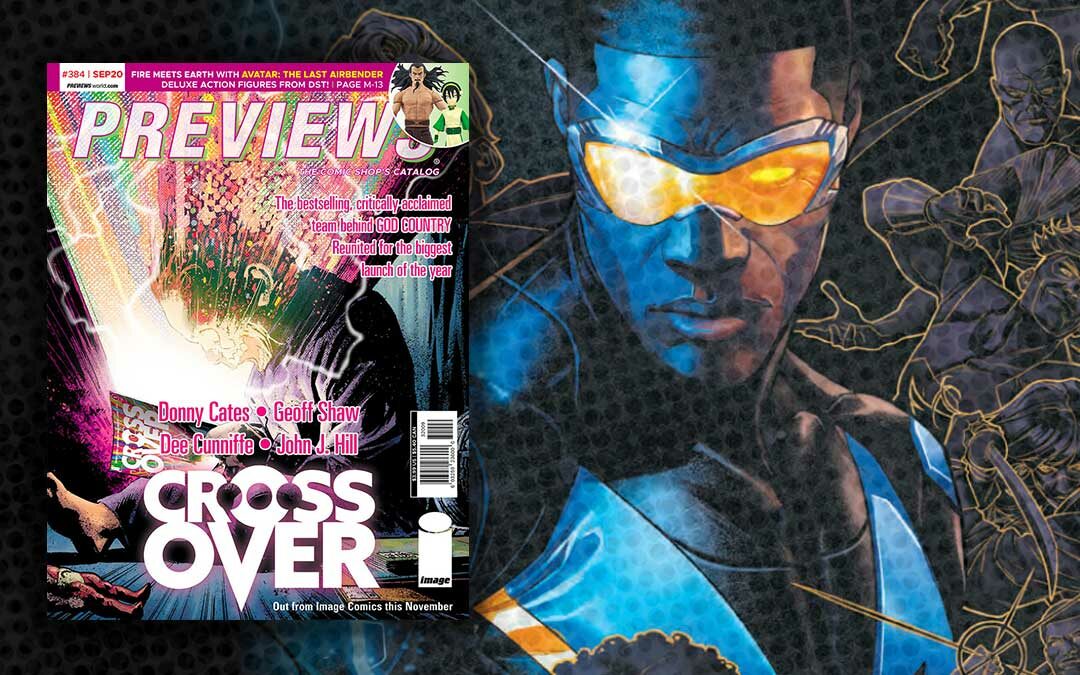 The new comics previews for titles shipping in November 2020 and beyond is one of the most interesting months in a long time.

Other History Of The DC Universe (Mature)

Academy Award-winning screenwriter John Ridley (12 Years a Slave, Let It Fall) examines the mythology of the DC Universe in this compelling new miniseries that reframes iconic moments of DC history and charts a previously unexplored sociopolitical thread as seen through the prism of DC Super Heroes who come from traditionally disenfranchised groups.

The creative powerhouses behind the bestselling, critically acclaimed GOD COUNTRY, Thanos Wins, and REDNECK returns for the biggest launch of the year. Imagine everything you thought was fantasy…was real. And now join us, in a world where reality is deadand anything is possible…

NEVER DIE. NEVER WIN. ETERNALS. What’s the point of an eternal battle? For millions of years, one hundred Eternals have roamed the Earth, secret protectors of humanity.  But today, Eternals face something new: change. Can they – or anyone on Earth – survive their discovery?

Long before the dreaded Demogorgon took one of them to the Upside Down, watch Mike, Lucas, and Will bond with Dustin for the first time over the game that would define their childhood. See the party come together as a team through communal stories and perilous quests to learn important lessons about friendship and find the courage to stand up to the bullies that challenge their everyday.

Tales From The Dark Multiverse Flashpoint #1

The DC Multiverse is a collection of alternate-reality worlds where anything is possible. Each world tells the tale of a possible split in reality, or shows how lives vary depending on a single, solitary decision. But now that the Multiverse has been destroyed, the Batman Who Laughs has used his god like power to create a new Dark Multiversea collection of 52 evil worlds, each more terrifying than the last.

House Of El Book One The Shadow Threat TPB

A brand-new vision of one of comics most famous tragedies the first of a trilogy of young adult graphic novels by New York Times bestselling writer Claudia Gray and illustrator Eric Zawadzki! Explore Krypton like never before: through the eyes of two teenagers on opposite sides of the same extinction-level event.

If you think you can unlock the gates of Hell and just invite yourself in, you must be Dreaming!

The epic crossover between two of the most beloved fantasy universes in comics begins here. John “Jack” Locke is ten years dead, but that hasn’t stopped him from posting the occasional letter home… from Hell.

Two New Series, Two New Teams – The UNLIMITED POWER Era Begins HERE- but who is the NEW Green Ranger and are they friend… or foe? The Mighty Morphin team go on a collision course with an even deadlier Lord Zedd, who has a new mission and a new motivation – one that will change everything you thought you knew about our heroes!

Spinning out of the pages of The Joker War comes the first solo book starring the blockbuster new character Punchline. The story of how Alexis Kaye became Punchline will take Leslie Thompkins, Harper Row, and Cullen Row on a harrowing journey that reveals a fringe teenagers radicalization to the ideology of a madman.

Once upon a time there was a little boy named Gus. He had antlers and lived with his father in a little cabin in the woods. Then his father died, and the big man with cold eyes took Gus away. Now, years later it begins again. A young boy with antlers and deer-like feature wakes in a bizarre and completely foreign world where the last humans struggle to survive. Sweet Tooth: The Return is no re-hash of the original series, but rather a bold re-imagining of the Sweet Tooth mythology; taking elements of the original series and remixing them into something familiar, but totally new.

CHRISTOPHER PRIEST & STEFANO LANDINI BRING BACK THE SUPER-SOLDIER YOU LOVE TO HATE! John Walker, the former Super Patriot, has been stripped of his official USAgent status and is now operating as an independent government contractor protecting government covert interests.

We Found A Monster TPB

Kirk Scroggs, writer and artist of The Secret Spiral of Swamp Kid, introduces a new type of best friend! Casey has always loved monster movies; in fact, he considers himself something of an expert on the subject.

TOP MARVEL TALENT SINK THEIR CLAWS INTO ALL-NEW WOLVERINE TALES AND THEY’RE BLOODIER THAN EVER! LOGAN. PATCH. WEAPON X. WOLVERINE. The mysterious mutant has gone by many names and lived many different lives. Now, experience ALL-NEW untold tales of the best there is through the lens of an all-star cast of creators, in the unadulterated black and white format (with a healthy splash of blood red all over)!