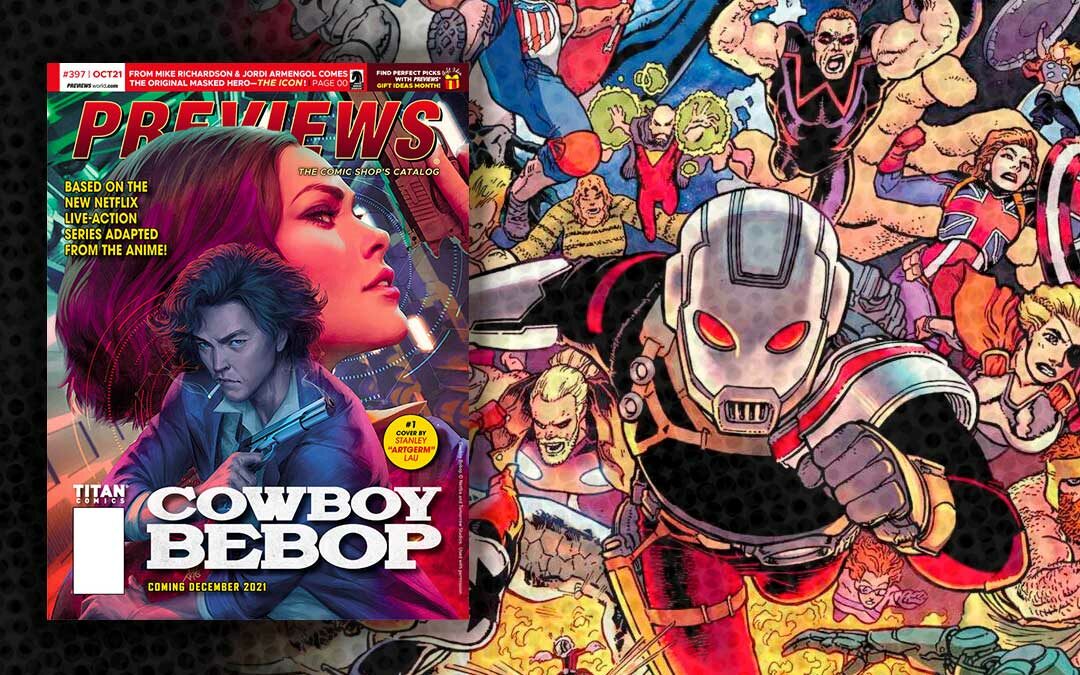 The new comics previews are out, and there’s a ton of great products for you to subscribe to. Marvel brings us Devil’s Reign and the launch of Avengers Forever. From DC there’s The Batgirls and a new Swamp Thing from Jeff Lemire. There’s also Buffy: The Last Vampire Slayer, Cowboy Bebop, Spawn Scorched, Vampirella Dracula Unholy, and so much more! These October previews are for products in shops December 2021 and beyond.

Based on the new Netflix Live-Action adaptation of the original anime starring John Cho, Mustafa Shakir, and Daniela Pinada.

The story that’s been building for years is here! The Mayor of NYC – Wilson Fisk, the man who once destroyed Daredevil has set his sights on The Fantastic Four, Iron Man, Captain America, Spider-Man, Jessica Jones, Luke Cage and more.

The adventure of several lifetimes begins as Vampirella and new husband Matt journey to Castle Dracula in Transylvania in an attempt to cheat fate by preventing an ancient curse from using Matt’s body to resurrect the deadliest threat the world has ever known.

On a quest for cosmic vengeance, Ghost Rider finds himself roaring through the wasteland on a ruined Earth, where the great age of heroes never came to be, where hope is a four-letter word. The next great Avengers saga begins HERE!

Mentored by Oracle, the Batgirls move to the other side of town where Barbara Gordon can keep a better eye on them while the hacker Seer is still invading their lives. Splashing the pages with bright colors against a dark backdrop of Gotham, Batgirls is the pizza slumber party of the year you dont want to miss!

Can a lone Slayer save what’s left of humanity? Buffy Summers is the last Slayer. Now in her 50s, she wages a one woman fight against the forces of darkness, who prey on humanity in the daylight unimpeded thanks to a magical catastrophe that has nearly blotted out the sun.

A desperate mother’s five-year search for her missing son leads her to the small town of Brimount and to the mysterious Phillips family. Daisy Phillips, like many teenagers, has a hard time fitting in, but not for the usual reasons.

Mariko Yashida’s journey through the mysterious forest of Kirisaki Mountain has brought her face-to-face with strange and terrible creatures. But she’s about to be tested like never before when she crosses paths with literal gods! You won’t want to miss this electrifying showdown.

After EARNEST GLECKMAN is mortally wounded, he discovers he must ‘pay down his new lease on life’ by serving as a part time fixer for a death cult. Each time he manifests his dark side as EVIL ERNIE it becomes harder to maintain his tenuous grip on his inherently good humanity.

Twenty-five years ago, a genuine masked hero came out of nowhere to declare war on crime. All of America celebrated the exploits of the black-clad vigilante as he took down one lawbreaker after another . . . and then he disappeared.

Jason Aaron and Mahmud Asrar return to the saga of CONAN in an all-new adventure that takes the story of the Cimmerian further than has ever been revealed in ANY media to date!

The first ALL-NEW issue of TODD McFARLANE’s superhero team book! There’s a threat so big that no single hero can stop it, and the formation of this new supergroup is the only thing standing in its way. Members will include SPAWN, REDEEMER, GUNSLINGER, MEDIEVAL SPAWN, and SHE-SPAWN, with many more heroes waiting in the wings!

A series of vicious short stories howling straight out of the pages of STRAY DOGS, 2021’s surprise cartoon/horror smash hit! In DOG DAYS, each stray will get their moment to shine-questions will be answered, mysteries will be solved, and old wounds will be torn open. Starting this December…every dog has its day.

Jeff Lemire returns to Black Label with one of the greatest artists in modern DC history, Doug Mahnke, in tow! Together they’ll unleash a gory, gruesome monster mash, where the fate of humanity rests in the hands of someone who isn’t human at all!

A special year-ending adventure that gives portents as to what is to come in the Marvel Universe over the next twelve months! When a parallel timeline threatens to overwrite the future Kang the Conqueror has built, he has no choice but to go to war with time itself.