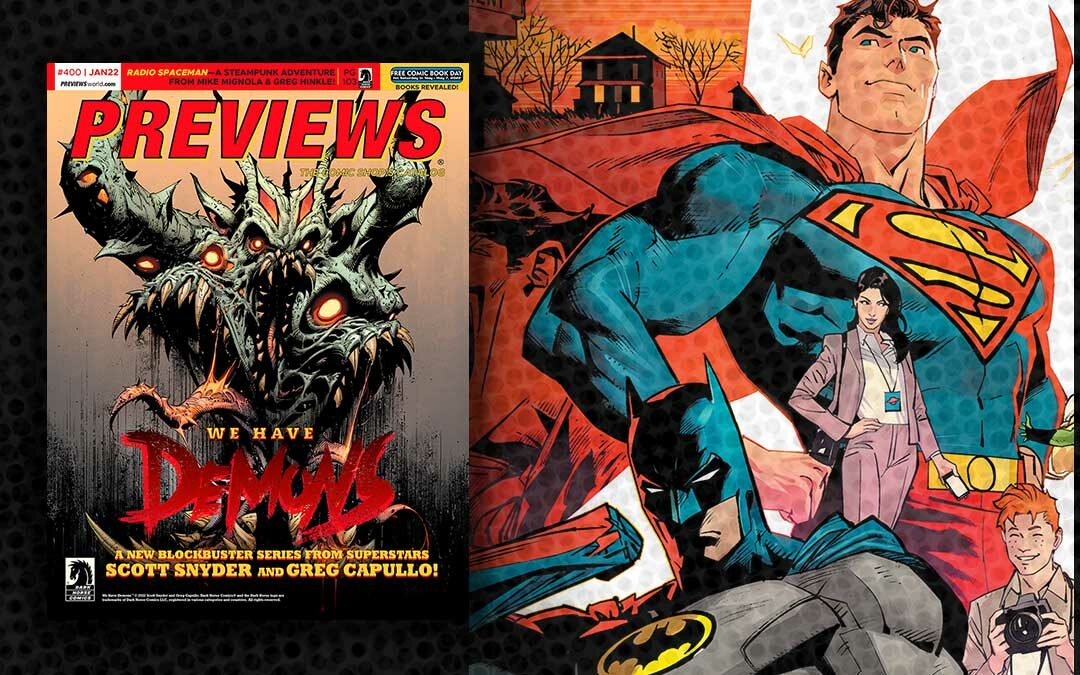 We Have Demons from the superstar team of Geoff Johns and Greg Capullo is among the highlights of a crop that includes a new Astro City at Image, Radio Spaceman from Dark Horse, a Captain Carter story from Marvel, and the return of the World’s Finest Superheroes at DC. The January previews are for products in shops March 2021 and beyond.

Astro City That Was Then Special

ASTRO CITY returns with an all-new special! Who were the Jayhawks? How did they inspire five teen sidekicks looking for answers to hit the road in a rickety crime mobile in 1969? And how will this affect Astro City in the present?

The Quiet Council rules the Krakoan age, for better… or worse. Now, shaken by INFERNO and X LIVES / X DEATHS OF WOLVERINE they strive to hold together, no matter how much they want to tear each other apart. Writer Kieron Gillen (UNCANNY X-MEN, ETERNALS, The Wicked + The Divine, Die) returns to the world of X with artist Lucas Werneck (TRIAL OF MAGNETO) to bring us all into the room where it happens.

We Have Demons (Mature)

Since the very dawn of man, legends have been told of the conflict between angel and demon-kind. Lam Lyle, a woman of science, dismissed these stories as just that-fiction. But when the loss of a loved one leads to the discovery of a hulking, benevolent demon named Hellvis, Lam realizes that her life is about to undergo a dire new direction.

Explore a brand new corner of the Valiant Universe! In a distant solar system, advanced mechs known as Armorclads are used to fight wars and build worlds.

Batman Beyond The White Knight (Mature)

A lot can change in 10 years, especially in Gotham! A new Batman has emerged in Powerss city, and only Bruce is fully aware of the dangers to come. Its time to destroy the mantle for good, but he’ll need one of his forgotten sons help to do so.

FaZe Clan, the world’s most prominent and influential esports and gaming organization, joins forces with Gotham Citys heroes for a once-in-a-lifetime adventure! A new enemy has emerged, and the Dark Knight must call on the worlds greatest gamers to help!

Nova Vega is a teenage idealist who resides on a mining colony run by the oppressive Omni corporation. Nova is disenchanted by her prospects of entering the Omni Mining Academy, for she’d much rather be out exploring the stars like her parents before her.

WOMAN OUT OF TIME? A reality where Agent Peggy Carter took the Super-Soldier Serum is turned upside down when the World War II hero is pulled from the ice where she was lost in action decades before. Peggy struggles to find her footing in a modern world that’s gotten a lot more complicated – cities are louder, technology is smarter and enemies wear friendly faces.

Dynamite’s cross-company zombie crossover returns with even more undead mayhem! Evil Sonja and the Drakulonian sisters Vampirella and Pantha may have turned back the plague on Earth, but what happens when zombies from MARS start to invade?!

When his megacorp power plant falls under attack by terrorists, the super-scientist who revolutionized and controls all energy on Earth sends his ultimate creation (and an adequate employee) in to destroy his most monstrous secrets.

They are the last children on Earth… who also happen to be vampires. Forlonger than they can remember, these child vampires have lived a life of eternal wonder amongst the ruins of humanity. But shocking events fracture the group and set them on a path of discovery that will shatter their innocence forever.

Shes back! Naomi returns to the pages of her own series to uncover the truth behind the new mysteries around herself and her powers. The entire creative team (Brian Michael Bendis, David F. Walker, and Jamal Campbell) behind the critically acclaimed and Eisner Award-nominated debut series.

“WILL THE PUNISHER’S WAR END? Born of tragedy. Devoted to war. Unstoppable in his rage. As the Punisher, Frank Castle has become the most accomplished killer the world has ever seen. Now it’s time for him to face his true destiny. What shocking secret from Frank’s past will convince him to take the reins of the Marvel Universe’s most notorious clan of assassins?

When a ship crashes and lands on a mysterious planet and some of the surviving crew go missing, the mysterious mechanical hero Radio Spaceman is called to investigate. But the planet hides much more than the missing crew, and Radio Spaceman may be stumbling into more than even he can handle.

The next story in the world of Radiant Black. To her students, Satomi Sone is a diligent middle school teacher. To her fianc and parents, she’s the rock of their family. To the world, she’s RADIANT RED, a criminal-turned-matter-absorbing superhero. B

Ten years ago, the Rogues disbanded and went their separate ways. But time hasnt been kind to the former blue-collar super-criminals. Caught in an endless cycle of prison, rehab, dead-end jobs, broken relationships, probation, and endless restitution fees, the Rogues are sick of paying for their crimes.

Trial of the Amazons

Written by Becky Cloonan, Michael W. Conrad, Joelle Jones, Vita Ayala, and Stephanie Williams Art by Joelle Jones, Elena Casagrande, Laura Braga, & Skylar Patridge After the events of Nubia & the Amazons, the dangers of Dooms Doorway have found their way to Mans World and garnered the attention of not one, but all three Amazonian tribes.

ALL-NEW action, intrigue and espionage awaits you as legendary creator Larry Hama returns with a story set before his original run on WOLVERINE!

A must-have for long-standing readers, and a welcome entry point for new readers of WOLVERINE!