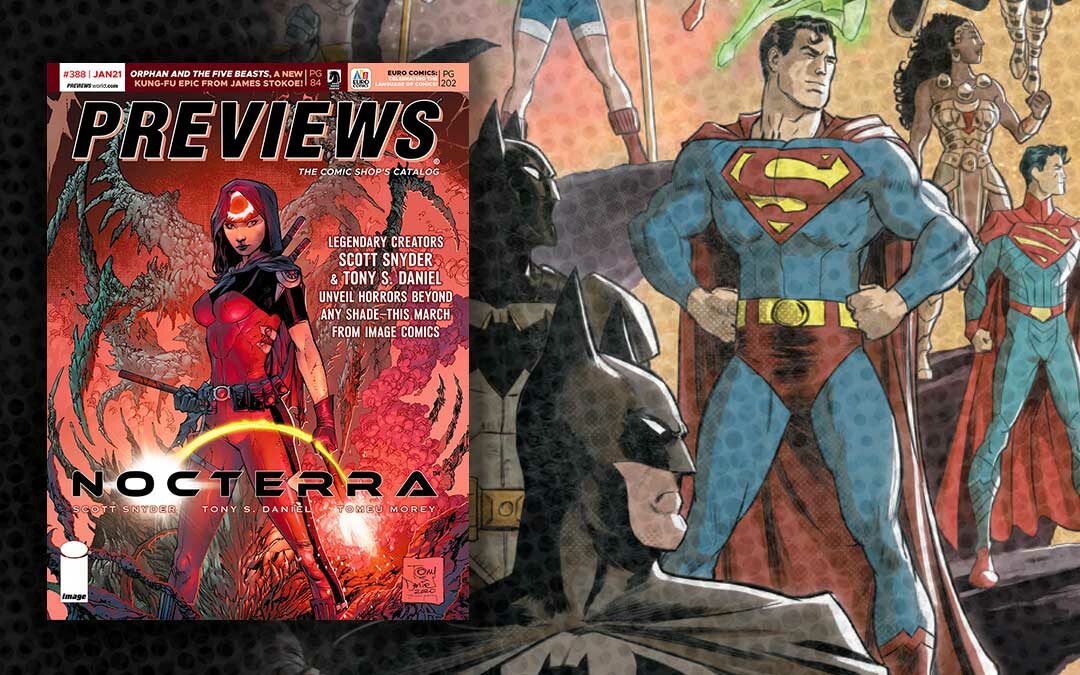 Happy new year! What’s new with us? Well, we’ve added another 100 more comics, trade paperbacks and hardcovers for subscription. DC brings us the Infinite Frontier, with new titles like Batman Urban Legends, Joker, Superman Red & Blue and much more. Image launches the new Scott Snyder series Nocterra. While Marvel brings us Alien and the wrap up of King in Black. All this and more comics shipping beginning March 2021 and beyond!

THE ICONIC CINEMATIC TERROR MAKES ITS MARVEL DEBUT!  Phillip Kennedy Johnson and Salvador Larroca team up to tell an all-new tale of the titan of horror and science fiction that has scared audiences for decades. No one is safe. No one is innocent. And no one can hear you scream. Parental Advisory

The next phase of the DC Universe begins here! Dark Knights: Death Metal presented the darkest threats of the Multiverse. DC Future State revealed what may lie ahead. Now its time to look into the Infinite Frontier of the current-day DC Universe.

This March, legendary creators Scott Snyder and Tony Daniel unveil horrors beyond any shade in this extra-sized first issue.

Batman may be the biggest name in Gotham City, but there are lots of other heroesand villainswho will get a turn to shine in Batman: Urban Legends, a brand-new monthly series tying into the biggest events in Gotham City. The series begins with these cant-miss tales: Superstar writer Chip Zdarsky enters the world of Gotham City with celebrated Detective Comics and DC Future State.

CARNAGE RULES! Witness the cerebral chaos caused by CARNAGE, brought to life by some of the greatest creators at Marvel! But beware, True Believers, true to their titular character’s namesake, these spine-chilling tales are not for the faint of heart and presented in BLACK, WHITE AND BLOOD! Parental Advisory

Set 20 years after the events of Firefly, Serenity soars the ‘Verse once again with a new captain – Emma, the daughter of Wash and Zo! Josh Lee Gordon (Firefly: Bad Company) and Fabiana Mascolo (Yasmeen) begin a new era for Joss Whedon’s Firefly with First Appearances of an all new cast, new adventures and shocking new surprises!

There’s a civil war brewing within SPECTRE. An upstart American member of the international criminal organization is attempting a coup, threatening to depose Ernst Stavro Blofeld. She’s on guard against Blofeld’s men, so to take her out, Blofeld recruits a wild card – James Bond!

Jonna And The Unpossible Monsters

Following the events of Infinite Frontier #0, The Joker is the most wanted man in the world! But the Clown Prince of Crime is several steps ahead of law enforcementand hes on the run overseas. James Gordon, facing retirement, realizes this is the manhunt of his life and the last piece of a storied careerbut what mysterious and deadly forces are also in pursuit of The Joker?

Spanish writer and artist GUILLEM MARCH is best known for his ongoing, extensive work with DC Comics on Batman, Catwoman, and Harley Quinn and has worked as an artist on several graphic novels including the English editions of Monika with Titan Comics and The Dream with Europe Comics.

After angering a number of hostile spirits in England, 13-year-old magician Johnny Constantine has to find a way out of the country. Persuading his parents to send him to America, John arrives at the Junior Success Boarding School in Salem, Massachusetts. But once there, he finds himself to be something of an outcast. And he is convinced that his homeroom teacher really has it in for him.

Finally, after months of delays, get ready for the most action-packed, pulse-pounding, adrenaline-pumping comic OF ALL TIME! As the name implies, once you read page one, panel one, SPIDER-MAN DOES NOT STOP! A mystery at Empire State University thrusts Spider-Man into an adventure that starts in uptown Manhattan and will take him around the world.

A brand-new kung-fu epic from James Stokoe, the creator behind Orc Stain and Aliens: Dead Orbit! Spurred on by her master’s dying words, the adopted warrior ‘Orphan Mo’ seeks to find and kill five former disciples who now threaten the land with corruption from their demonic powers.

The unholy alliance you prayed would never happen! For countless generations, the fight between good and evil has been fought, as much behind the scenes as in plain view. Unbeknownst to the world at large, one force has stood as a safeguard against the potential triumph of evil and the unleashing of the apocalypse: The 36.