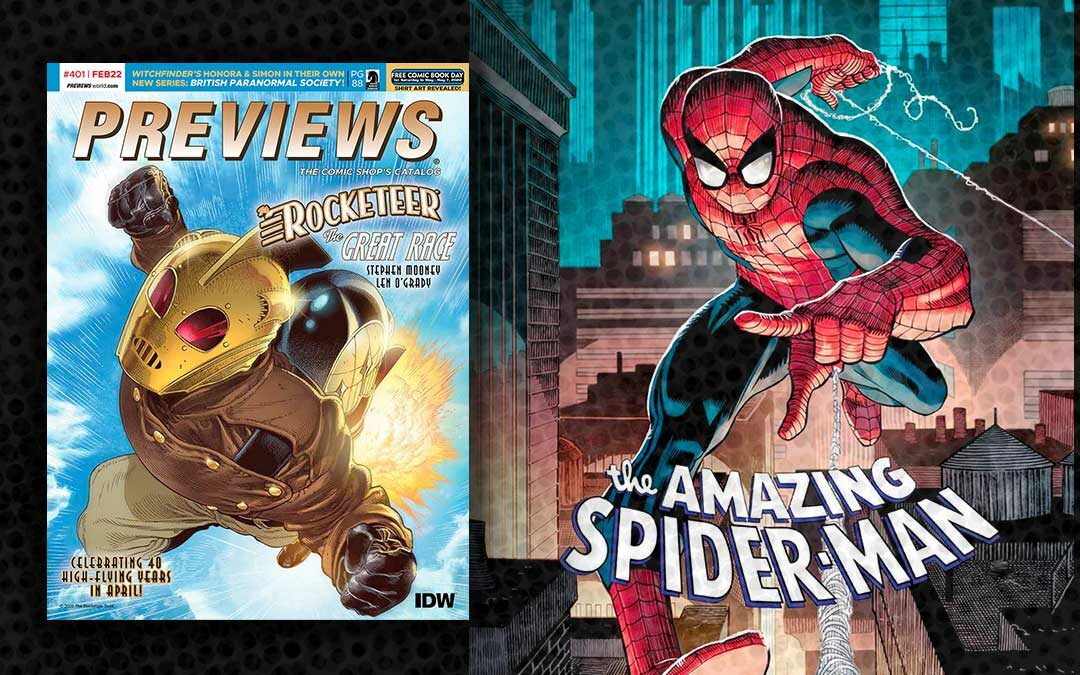 Amazing Spider-Man relaunches, Geoff Johns returns to the world of Flashpoint, Image celebrates its 30th anniversary, a new Sandman Universe series kicks off, and much more. The February previews are for products shipping in April 2021 and beyond.

The world of Flashpoint returns! After sacrificing everything to help the Flash put the universe back together and save Bruce Waynes life, Thomas Wayne wakes up in a world he thought was no more.

Far away from Ninjago City, a village is terrorized by a mysterious new threat when they’re saved by a stranger with incredible powers known as Garmadon, Lord of Destruction?! Has Garmadon turned over a new leaf?

Ace stunt pilot Cliff Secord has returned from his New York Adventure to a West Coast steeped in paranoia over the looming war in Europe. Having finally had enough of his near-death scrapes as the high-flying Rocketeer, the only thing in Cliff’s crosshairs is The Great Race: a prestigious, winner-take-all air race that runs from California to France!

Neo-Gotham is alive and has killed Bruce Wayne. It’s rejected Terry McGinnis as Batman and offered him the chance to escape. Terry turned it down he is the city’s protector, and he will uphold the legacy of Batman. Now Neo-Gotham will do everything in its power to destroy Terry, including creating brand-new villains to fight him.

Atticus Sloane-misanthrope, criminal, asshole, and vampire-lives in a world where blood isn’t the only thing vamps crave. And for the right price, he’ll make you a vampire too. After all, immortality isn’t cheap.

British Paranormal Society members Simon Bruttenholm and Honora Grant arrive at Noxton together, but with separate goals: Honora hopes to uncover information on the town’s strange traditions, while Simon is searching for his missing assistant.

Hulk and Thor have both undergone massive changes recently, but one thing remains constant – their heated rivalry! When mysterious circumstances bring them into conflict once more, will the God of Thunder be able to triumph against a Bruce Banner who can now control his rage?

Celebrate the 30th anniversary of the first Image comic with a year-long parade of all-new stories from some of the biggest and best names in comics! Featuring a combination of ongoing serials and standalone short stories.

Sonja as you have never witnessed! It is a time of British legend! A young Red Sonja, cursed by mysterious chainmail, seeks counsel with the mysterious MERLIN.

As the nation is torn apart, someone is murdering all the patriotic heroes. A mysterious amnesiac awakens in a sealed underground base, naked and abandoned. This John Doe emerges to the year 2052, where the entire Project Superpowers Universe has been turned on its head.

Sometimes, nightmares walk the Earth. Every night when you sleep, the Lord of Dreams chooses the path youll followinto a sylvan Elysium, or down the hallways of your darkest fears. And sometimes, if it is Dreams will, those nightmares escape those halls, and go out into the world. But it is not a choice he makes lightly. Today the Corinthian walks the Earth again.

ANARCHY IN THE SPIDER-VERSE! SPIDER-PUNK GETS HIS OWN SERIES! HOBIE BROWN is THE ANARCHIC SPIDER-PUNK – set to protect EARTH-138 with his ax in hand and his chaotic band of punk rockin’ heroes backing him!

A bold new story in a new universe begins, courtesy of Hugo Award-winning author Sarah Gailey and artist Irene Flores. After years of fighting against the forces of evil, Buffy Summers finds herself succumbing to the burden of bearing the Slayer mantle.

WHO CAN SAVE THE RED PLANET? The mutants of Arakko spent millennia scarred by war – but on what was once called Mars, they’re learning to live in peace. STORM knows the red planet needs something greater than a queen. But ABIGAIL BRAND has other plans, along with an unstable VULCAN on her side and CABLE keeping his own secrets.

Cut off from Krakoa, Betsy Braddock is Otherworld’s only hero – and to save her people, Betsy must recruit a round table of her own. The Knights of X gather to restore the rightful order and rescue desperate mutants – but their quest is about to get so much bigger than that.

Krakoa has its laws – but does it have justice? To remain a mutant sanctuary, Krakoa must safeguard itself against those who would damage its peace or traumatize its people. The lost must be found, and the wicked must face redemption – or retribution.