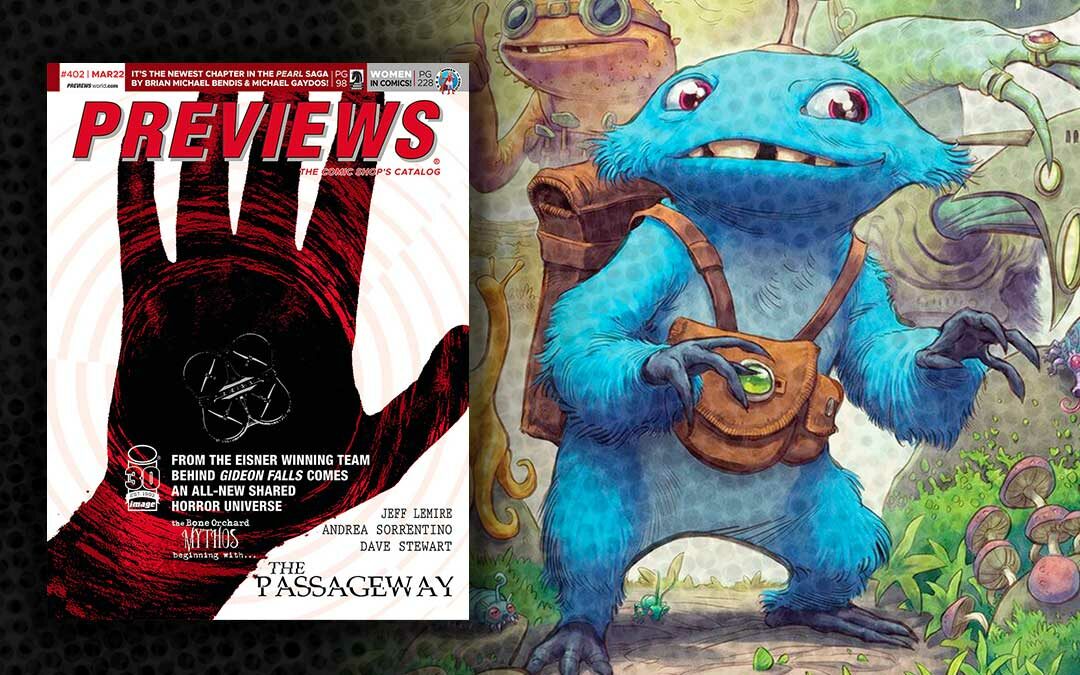 Jeff Lemire’s Bone Orchard Mythos kicks off, Twig debuts at Image, Geoff Darrow’s Shaolin Cowboy returns, Skrulls, Gambit, and Sam Wilson Captain America stories launch at Marvel, The road to the Dark Crisis begins, and Duo is the latest hero on Earth-M at DC. March Previews are for products in shops beginning in May 2022.

THE PASSAGEWAY is the first of a dozen new interconnected projects making up THE BONE ORCHARD MYTHOS from LEMIRE and SORRENTINO!

You think you know all there is to know about Remy LeBeau, the Ragin’ Cajun, the mutant known as GAMBIT – but legendary X-scribe Chris Claremont has an ace up his sleeve with this new series!

You asked, and we delivered the Blood Syndicate is back! Wise Son and Tech-9 have returned from their military tours in Afghanistan, and life in Dakota City could not be more different.

In the spirit of the Golden Age of comics, Eric Powell brings you a new anthology series featuring his fan favorite creations. The Goon, Hillbilly, La Diabla, Lester of the Lesser Gods and Lula the Bearded Girl will all be featured in the pages of Albatross Exploding Funnybooks!

Gary Whitta and Darick Robertson have joined forces to tell a brutal and shocking adventure that will turn everything you think you know about Superman upside down!

Tom King and Jorge Fornes (Rorschach) return for an unforgettable maxiseries that reimagines the characters and their stories. A multicharacter, multilayered crime drama starring some of DCs most obscure creations: no one will see it coming, but everyone will want to see where it goes!

The Justice League has tragically fallen in battle, and now we see the aftermath. How does the world react to the Justice League being gone? Which heroes rise up…and which villains try to take advantage? And what dark forces are lying in wait to attack?

Dune The Waters Of Kanly

Go deeper into the Dune universe with this lore-expanding story set during the events of the Frank Herbert classic! Artist Francesco Mortarino brings the story by original authors Brian Herbert & Kevin J. Anderson to life in ways that will excite both fans of the novels and the recent hit film alike!

If you had one wish what would you wish for? Now, what if everyone else had one wish too? That’s EIGHT BILLION GENIES, the new eight-issue series from CHARLES SOULE & RYAN BROWNE (CURSE WORDS).

Jessica Harrow is dead. But her journey has only just begun! Discover the world of the afterlife, where Jessica has been recruited as a Reaper, tasked with ferrying countless souls to their final destination. But unlike the rest of the Reapers, she has no memory of what killed her and put her into this predicament.

You know the story: an infant escapes the destruction of its home planet and is deposited on Earth to be raised by human parents. A goddess from a lost city defends truth. A Tyrannosaurus rex dons the visage of a bat to strike fear into evildoers hearts. This heroic trinity, alongside a league of other super-powered dinosaurs, join forces to save a prehistoric Earth from the sinister machinations of Darkseid. Wait…what?

AN ALL-NEW, ALL-DIFFERENT, ALL-DANGEROUS TEAM ASSEMBLES! Since his exile from the Hyborian Age, Conan the Barbarian has conquered the most dangerous foes the modern Marvel Universe has to offer – but what happens when this hard-edged Cimmerian finds himself on the run from the cybernetic soldier of the future known as Deathlok?

THE SKRULLS ARE BACK… …in a giant-sized issue kicking off an all-new five-part miniseries! When Maria Hill detects the merest HINT of Skrulls, she acts quickly to put her defensive plans into action.

FAST APPROACHES THE ULTIMATE DESTINY OF ONE OF THE JEDI’S MOST RENOWNED MASTERS! As he spends his final days in the remote deserts of Tatooine, Obi-Wan Kenobi takes time to reflect on – and record – key moments of a heroic life long-lived. Writing in old leather-bound journals from his hermit’s hut,

Shaolin Cowboy Cruel To Be Kind

In Phase 4 of the SCU, the Shaolin Cowboy finds his parenting skills being tested when he is forced to homeschool during a pandemic of unparalleled violence, in this story torn from yesterday’s viral twitter feeds.

The shocking finale of the Shadow War! Lives have been lost. Heroes and villains have fallen in battle. And now the real mastermind behind the Shadow War has been revealed. But they are far from done!

When the last stars flicker and fade, who will be the only Cybertronian left? The planet Donnokt sits on the edge of the universe, far away from all the stars that are flickering and fading out one last time.  The war for Cybertron may be long over… but the war from Cybertron never ends.