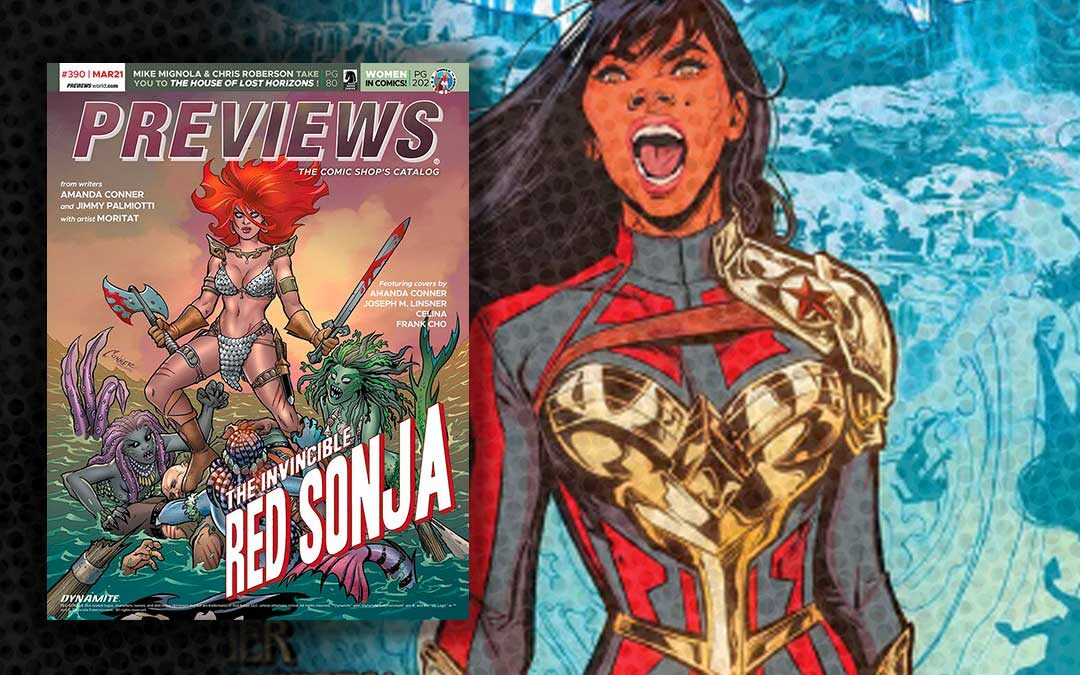 Red Sonja is Invincible (from Jimmy Palmiotti and Amanda Conner), Yara Flor leaps out of DC’s Future State as the new Wonder Girl!, and Marvel introduces an all new Heroes Reborn!  There’s so much goodness in the March Previews for comics shipping in May 2021 and beyond!

Written by the award-winning fan favorites AMANDA CONNER and JIMMY PALMIOTTI, Red Sonja finds herself on a spectacular journey filled with pirates, mermaids, princesses, and political intrigue as the threat of two kingdoms hangs in the balance.

The story of Yara Flor starts here! Raised in the far off land of Boise, Idaho, Yara Flor has always felt something was missing from her life and now she is headed to Brazil to find it. Little does she know her arrival will set off a series of events that will change the world of Wonder Woman forever.

A WORLD WITHOUT AVENGERS! Welcome to a world where Tony Stark never built an Iron Man armor. Where Thor is a hard-drinking atheist who despises hammers. Where Wakanda is dismissed as a myth. And where Captain America was never found in the ice because there were no Avengers to find him. Instead this world has always been protected by Earth’s Mightiest Heroes, the Squadron Supreme of America.

Balancing his two lives, Bruce Wayne must find the truth about Harvey Dent’s fate by tapping his growing network of agents, including Alfred Pennyworth, Jim Gordon, Waylon Killer Croc Jones, and the savvy new Catwoman. Bruce is distracted by the seemingly impossible return of another figure believed dead: his grandfather Adrian Arkham.

When the ice caps melted, most of humanity was lost to the hidden disease that was released. Now, a mysterious girl named Eve has awoken in secret and must deal with a world that’s nothing like the virtual reality she was raised in.

In the tradition of SPIDER-MAN: LIFE STORY, and in celebration of the FF’s 60th Anniversary, comes this series setting the lives of the fabulous foursome in real time across the years!

A locked-room murder mystery puzzles paranormal detective Sarah Jewell and her associate Marie Therse when a weekend trip on a private island off the coast of Washington goes astray. Trapped by a storm and surrounded by myriad suspects who have gathered for an auction of occult items, the intrepid duo must unravel the supernatural mysteries surrounding the guests in hopes of uncovering the murderer!

The event that was DC Future State continues in its own ongoing title starring the Bat-Family, beginning with the epic story Hunt the Batman. Disaster strikes Gotham City, and all evidence points to the Next Batman! Red Hood must choose justice over his family and allies when the corrupt Magistrate enlists him to bring in the new Batman dead or alive!

Following Edison Hark-a haunted, self-loathing Chinese-American detective-on the trail of a killer in 1936 Chinatown, the Good Asian is Chinatown noir starring the first generation of Americans to come of age under an immigration ban, the Chinese, as they’re besieged by rampant murders, abusive police, and a world that seemingly never changes.

At last, its the return of the legendary Milestone Comics! This one shot features twenty-four all-new pages chronicling the events of the Big Bang: the police-brutality protest gone wrong that changed the face of the city of Dakota forever by unleashing a wave of superpowers across its population!

Mister Miracle The Source Of Freedom

Spinning out of DC Future State, the story of how Shilo Norman became the Mister Miracle of tomorrow starts here. The Mister Miracle show used to be the hottest ticket in town, whether you caught him onstage escaping from perilous traps or spotted him on the streets of Metropolis taking out bad guys.

While humanity grapples to survive on Mars, the Ministry of Exploration pins mankind’s last hope of resurgence on an astronaut who’s scared of space.

REPTIL ON THE BRINK OF EXTINCTION! In the wake of Kamala’s Law and his Grandfather’s worsening health, Humberto Lopez, A.K.A. Reptil, has taken a step back from crime-fighting to refocus on his family.

KRAKOA IS FOR CLOSERS! The deals have been made. Mutantkind is safe on Krakoa. As the Reign of X continues, what are the wants of the mutants who have everything? Leading the charge is X-CORPORATION, headed by CXOs Monet St. Croix and Warren Worthington, a duo as cutthroat and ruthless in the boardroom as they are on a battlefield.