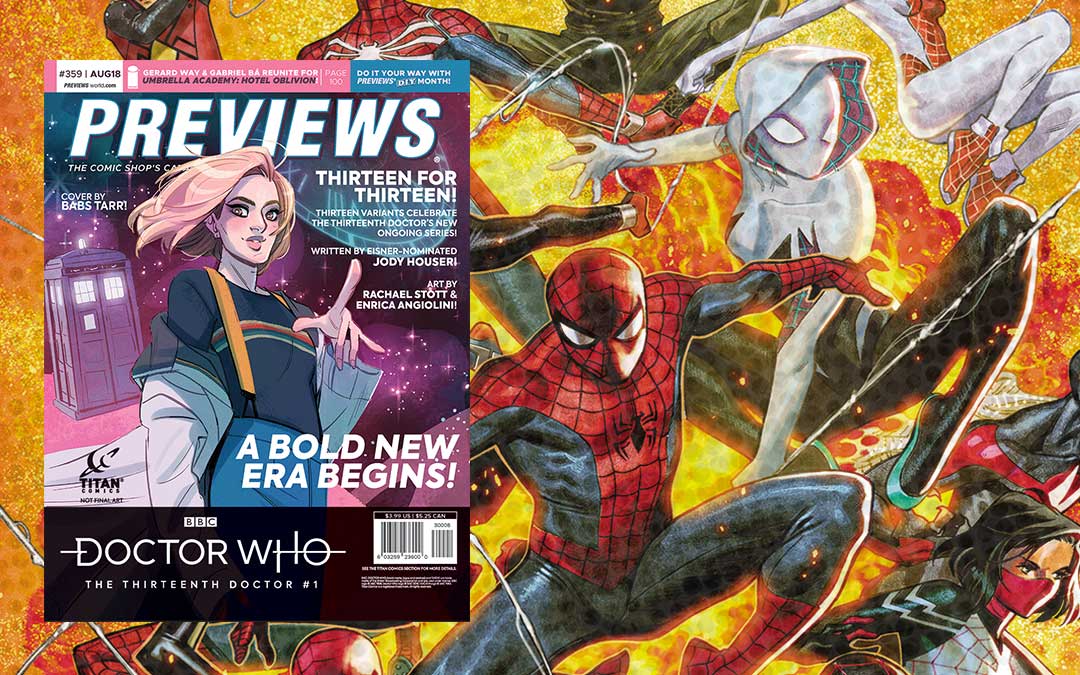 Who else is surprised that the summer is half over? It really sneaks up on you. In less than a month schools will be open, and everyone will be getting back into a regular routine. Before that happens though, we’ve got the last bit of the summer season to look forward to.

There’s a ton of comics that were just announced, and this month we’re looking at comics that will be shipping in October 2018.

The spotlight comics this month are:

Image Comics presents the 15th anniversary of The Walking Dead. Now’s a great time to jump back on board of the Walking Dead as the comic and the TV series veer further apart from each other.

From Titan Comics comes The 13th Doctor, as an all new incarnation of everyone’s favorite time traveler begins her own story. It’s Jodie Whitaker’s turn to take control of the TARDIS from the series writer Jodie Houser and artist Rachel Stott (Peter Capaldi’s favourite Doctor Who artist).

DC Comics gives us Wonder Woman and the Witching Hour #1 – just in time for Halloween it’s a five part weekly event that will rewrite the rules of magic in the DCU. The witch god Hectate activates her “Witchmarked” – humans secretly holding vast stores of power to help her battle monsters bent on her destruction…including Wonder Woman.

From Marvel: Spider-Geddon follows the stories of the Spider-Verse as Marlin and the Inheritors set their sights on the entire Marvel Universe!

Other comics that look great in October.

Finn and Jake are BACK! Adventure time is shutting down after 10 seasons of amazing sci-fi adventure, but Adventure Time Season 11 gets underway from Boom! Studios this fall. The survivors of The Great Gum War must rebuild their lives and the land of Ooo, and maybe make new friends along the way.

The Umbrella Academy makes its return as Gerard Way, the frontman for My Chemical Romance, returns to the world that he created. It’s a family of super-heroes trained to defend the earth against an unknown threat. With a new Netflix series starring Ellen Page, Tom Hopper and Colm Feore coming later this year, you know that you want to get in on this action.

Also from Dark Horse, The Whispering Dark is a new horror series by Christopher Emgard and Tomas Aira. An Army pilot confronts supernatural horror in a story that is equal parts Lovecraft and Apocalypse Now!

Tim Hunter is back, this time as part of the Sandman Universe in DC Vertigo’s all new Books of Magic series. Written by Kat Howard and drawn by Tom Fowler.

Frank Tieri and Amanda Conner tell the story of Old Lady Harley, a future story featuring Harley Quinn liberating New York City from her now feral gang of Harleys and the Laughing Boys. Will she return to her island paradise, or seek out President Power Girl for help against…him.

Image Comics delivers Blackbird, In the city of angels, Nina Rodriguez thinks that magic is real, when magical forces take her sister away she knows that she’s the only one who knows the truth and will have to get to the bottom of this mystery in a new urban fantasy set in Los Angeles by Sam Humphries and Jen Bartel.

Also from Image, Dead Rabbit follows Martin Dobbs, a former gun for hire who is forced out of retirement with violent, and funny results. It’s by Gerry Duggan and John McCrea, so expect equal parts Deadpool and Hitman craziness.

Want to see something REALLY scary? Check out Vader’s Castle in IDW’s new 5 week Star Wars event which sees the Dark Lord of the Sith in his terrifying castle on the world of Mustafar with tales featuring Finn, Han Solo, Obi-Wan Kenobi and more.

Marvel’s T’Challa’s techno genius sister steps out in a brand new series with – Shuri by Marvel Comics. Written by Nnedi Okarafor and with art by Leonardo Romero.

The infinity Wars tie ins are back with Infinity Wars: Sleepwalker, and two brand new Infinity Warps titles – Arachknight, featuring Peter Parker the avatar of the Spider-Totem doing the bidding of the great weaver, and Weapon Hex – the 23rd attempt of breeding individuals specifically for magic use which netted Wanda, one of the deadliest people on the planet.

The Unstoppable Wasp is back by popular demand, with Nadia Van Dyne and her team of girl scientists and the Agents of G.I.R.L.

There you have it, that’s the highlights coming out in October 2018, but we’ve got about 150 new comics you can subscribe to.

We find that the emails we send out, which link directly to the subscription pages for each title, dramatically increase new subscriptions.  We’ve once again written an email that’s ready for you to import.